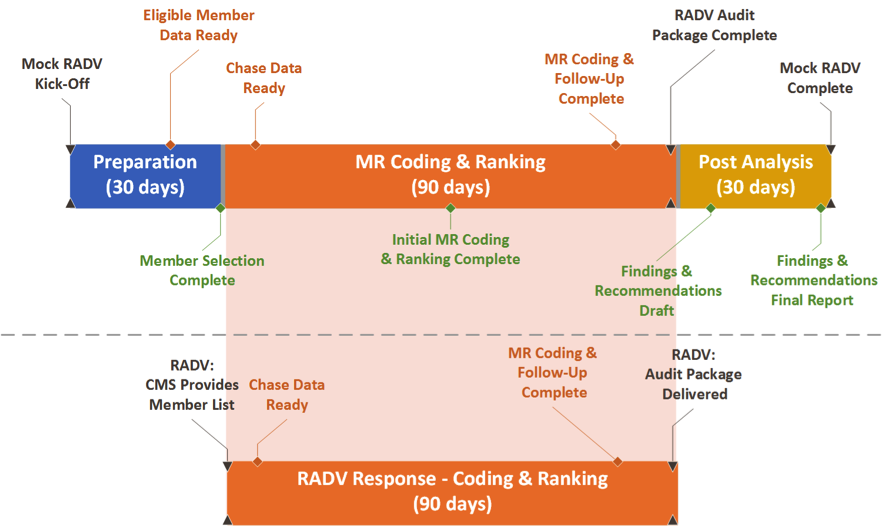 With CMS’ recent announcement of the delayed implementation of HHS Risk Adjustment Data Validation (HRADV), a number of colleagues involved in risk adjustment for commercial exchange plans have been wondering if they should still be conducting mock RADV audits; or do something else; or do nothing for now.   While I have never been an advocate for conducting ‘MOCK’ RADV audits in a manner that exposes a health plan to greater financial risk, I do strongly encourage everyone I talk with to conduct periodic RADV Preparedness ‘Fire Drills’ and Targeted Audits. Those plans that just got a reprieve from the HHS RADV are no exception.

So why should one bother conducting an internal audit of the accuracy and completeness of their Risk Adjustment data, when the regulators won’t be looking over their shoulder until 2018?  To be ready when it counts.  Clean up your data so that when the ‘one and only trial audit’ in 2016 occurs against your 2015 data, your plan doesn’t find itself trying to catchup with the competition.  With only 20-30% of a commercially risk adjusted population having an HCC relevant diagnosis, just one missed code could mean the difference between a plan receiving a payment, or having to pay a competitor.

What are some of the things plans should be doing now? If you haven’t already engaged an IVA firm, hire one. Not necessarily to duplicate the exact IVA (for a number of reasons), but a targeted audit.  The second thing I encourage is putting together a work team charged with conducting targeted audits of their data to get a better understanding of where the holes are in both process and data. Fix them. And audit again. It is worth the effort and not just for peace of mind, but financially as well. 2016 is just around the corner.

Reveleer is a healthcare software and services company that empowers payers in all lines of business to take control over their risk adjustment and quality improvement programs. The Reveleer platform enables payers to independently execute and manage every aspect of provider outreach, retrieval, coding, abstraction and reporting – all under one single platform. Leveraging its technology, proprietary data sets, and subject matter expertise, Reveleer also assists payers with full record retrieval and review services to support financial performance and improved member outcomes.